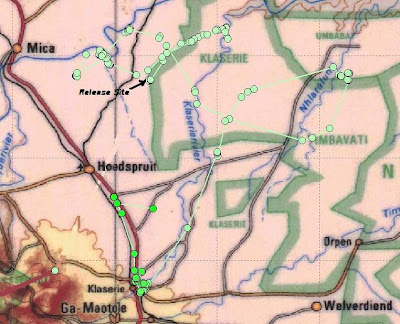 2 Months have gone on since Agatha’s release back into the wild and she is doing very well so far.

Agatha falls into the group we call “Relocated Leopards”, this means that she was taken from one area (where she was snared) rehabilitated and then released into another area (unfamiliar to her). We knew that there was a chance of other leopards being in the area of her release seeing that it was on a large Game Reserve. We had to make a choice to release or keep her locked up for life in an enclosure.  We expected her to move over great distances to avoid conflict with any resident leopards that may be in an area she would try to settle in. Situations like this she would need to deal with to find space to settle down.  This is just what Agatha did!

From the time of her release she began drifting around in the Balule Game Reserve, crossing over to Klaserie. Here she probably hit some resistance from another leopard because according to the map, that we monitor her movements by, she turned and seemed to come back to Balule quickly. She then wandered a bit north crossing over towards Olifants West, crisscrossing as she went. She then followed the river to the northeast and crossed through Klaserie into Timbavati doing a great big anti-clockwise circle to the north of Timbavati and Umbabat, back into Klaserie and coming down to the south leaving the protected areas.

Here she entered a very dangerous area which consists of privately owned land varying from agriculture, cattle and game. Snares, fences, poisons, tar roads and a few unhappy farmers now lay strewn around her and she must rely on her ability to remain unseen and use her cat instincts to avoid these obstacles. She is obviously still coping well in this as she has moved all the way through most of the hostile land feeding on what she can and settled for about 3 weeks on a game farm where there is very little human activity. But soon she was on the move again and is now on her way north. The total distance she covered (from dot to dot on the map) is approximately    250km. And the area she has covered so far is about 98000ha, but this is not accurate as she is moving long distances and not staying in one specific area.

One of our main concerns apart from being able to defend her self was; would she be able to kill after the awful ordeal in that snare. Happily she is! We can safely say this because she would never have survived through 2 months without killing. So we are well pleased with her progress.

To conclude this update we have to say that all her actions have been what we sort of expected for a relocated leopard. There is always a risk that animals like this can get killed or wounded during territorial disputes with other leopards, which could be the case even with settled territorial leopards. In other words, there is still much that could happen and hopefully she will settle down in a vacant home range. But until then we will keep an eye on her with the ‘eye in the sky’…
Posted by Moholoholo Animal Rehab Center No comments: Links to this post