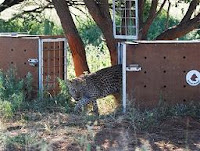 Just a quick update on the blog of 28 August, ‘Unwanted Still’, about 2 young leopards that were caught on one of the nearby farms. The farmer did not want them on his property because they were killing his cattle. More precisely it was their mother that killed the cattle.

The 2 youngsters could not be released after they arrived at Moholoholo Animal Rehab since they were too young and would still be with their mother had they been in the wild. We therefore kept them at our centre for a few months until they were old enough to be released.

We were approached by one of the more recently formed conservancies in the Hoedspruit area, the Blue Canyon Conservancy, asking us if we could release these leopards in their conservancy.

This was a perfect opportunity and with Environmental affairs consent we were able to release these beautiful cats in the Blue Canyon conservancy. Various owners from the Conservancy sponsored 2 GPS collars to monitor them within their boundaries as well as outside of the Conservancy.

We named them, Blue Canyon 1 and 2, and released them in the conservancy on 21 February 2009. They went their separate ways immediately and were quick to get out of sight and as far away from us as possible. From that point on we would only see them as dots on a map hidden in their bush surroundings.

As they were still with their mother when they were caught we doubted that they were fully capable of hunting by themselves. They would have that built-in killing instinct but not the technique, so we monitored them closely.

It was not long before Blue Canyon 2 made his first kill, a baby waterbuck. This was thrilling news and we knew he was on his way to becoming another of the rehabs success stories. Usually our only way of knowing if a leopard has killed anything is when they stay on the same spot for more than 6 hours (after dark). They would normally stay with their kill and feed off it for up to 3 days if it suits them.

Blue Canyon 1, however, did not follow this same pattern. He never gave us the slightest clue (inkling) that he had killed anything. He seemed to be the more nervous of the 2 cats and after 7 days with no signs to indicate a kill, we had to conclude that he was simply too nervous to return to his kills, as he would have been starving at that point if he had had no luck.

Blue Canyon 2 is still quite happy within the area he was released and has been staying in an area of about 1000ha in the northern triangle of the conservancy. Blue Canyon 1 again had different ideas. He did not like the area, and possibly had faced some conflict with other predators, for there are lion, hyena and other leopards on the conservancy. He soon moved to the southern end of the conservancy and within a few days had left the conservancy’s boundaries, heading south toward the mountain.

The area he was moving towards was not ‘leopard friendly’ at all and he was in danger.

Blue Canyon 2 continues to reside in the northern side of the reserve and has been closely monitored by Game Ranch Management Services from Hoedspruit to see what he is killing and documenting their finds. To date we believe that 2 waterbuck calves, 4 impala and 2 warthogs have been killed by Blue Canyon 2.

Sadly we have not received any new data from Blue Canyon 1 for the last few weeks. We do not know where he is and there is a chance that he has been killed or the collar malfunctioned. There is also a chance that the collar has come off and that it is lying in a place where there is no cellular coverage and can not send any data back to the server. We sincerely hope that the animal is still alive and is doing well.

At the end of the day we were glad we were able to give these young leopards a chance to go back to the wild, and whilst every release holds much uncertainty for the future, the wild is where these beautiful creatures belong, and for as long as we can find suitable habitat to release them in, our work will continue with the species!

We will be sure to keep you posted on these young leopards story! For more information on Moholoholo visit the website.
Posted by Moholoholo Animal Rehab Center No comments: Links to this post

Goodbye Blondie – the last of the Circus lions!

Many of you may recall the lion, Blondie, from your visits to our centre over the last 13 years. He was confiscated from an Egyptian circus that was traveling through Africa in 1996. They apparently went bankrupt in Mozambique and abandoned their animals, locked in small cages and with little or no attention at all. They were in very poor condition and we were asked if we would offer them sanctuary here at the centre. Both had broken their teeth from biting at the bars desperately trying to free themselves. 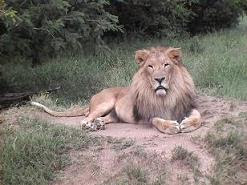 Animal Defenders from the UK came to the rescue and managed to find homes for all the animals from dogs and horses, to lions and tigers.  It was not an easy task, with a lot of obstacles in the way, but eventually with plenty of persuasion and determination they won and the animals were distributed to different centers in the country. Three of these lions were brought to Moholoholo Rehab Centre. Blondie was the youngest of the lot and seemed to have been in the best condition.

A sight Brian and Jenny will never forget is the moment the door was opened to the lions ‘traveling boxes’. They stood and looked out into their ‘large’ enclosure’, then one proceeded to venture out……..put a paw on the ground and took it back immediately, tried again, then ventured out….. walked up to a tree, smelt it, then walked the entire enclosure and I am sure if he could have spoken he would have said “Is this real? Am I really on natural ground? Will there truly be no more bars, prodding, eating measly meals? Am I really going to have room to play, roam and walk  around which I have been missing for all these years from being cramped in a tiny 2 x 4m cage!?)

Jenny also recalls that for the first four months that these lions were at the centre, they had never roared. One evening they put a tape on classical music (including one track which sounded much like the music one would play in a circus), and were amazed by the sound which erupted from these reluctant residents.  From then on the circus lions of Moholo Rehab roared on a daily basis It seems so strange that something that would bring back unhappy memories would stir them on to roar.

Many people think that animals do not remember. Just one of many incidences which proves this theory wrong was on a day when an African by the name of Wisdom from Zambia, came to visit us.  It turned out he was one of the guys who cared for the lions whilst working in the circus.  We asked him to call Blondie then known as Akef, who was lying at the back of the large enclosure. Wisdom called him……what an amazing sight!! 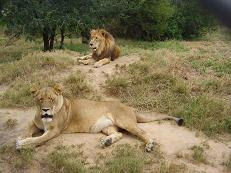 Blondie immediately stood up and came towards him, we would have loved to have seen his proper reaction to Wisdom, however it was unfortunate that Sarah who he shared the enclosure with was in season and Blondie was not prepared to leave her alone.

After many years of sanctuary here at the rehab, these lions (Goldie, Shortie and Blondie) had stolen the hearts of many visitors and staff which came through the gates.  Their story was heartbreaking, and their little stubby teeth were a constant reminder of their painful past.  It was a pleasure to offer these boys our very best, good food, a nice large enclosure, and even an attractive lioness (who by the way was given contraceptives so that no breeding occurred)!

In 2008 we were forced to make the difficult decision to have Shortie humanely euthanized.  As his name suggests he was a very stunted lion and seemed to only shrink as time progressed (as is so often the case with old age)!  It was only the common signs of age; weight loss, inability to control his bladder and difficulty in moving around and performing his usual daily behaviors which forced us to make this difficult decision.

A year later we were faced with the same prognosis with Blondie.  He was losing weight at a rapid rate, he was urinating down his legs throughout the day, and his roars became less and less.  The staff and students all agreed that the kindest thing to do was to put him to sleep.  He was euthanized on the 21st April 2009. These boys had, at the very least, enjoyed the last 13yrs of their lives in peace, and their impact on the thousands who saw them over the years, will hopefully live on long into the future.

They have lived their years out as almost a wild lion would have and yes, we can say we gave them the best we could under the circumstances. We can always look back firstly with gratitude that we were given the opportunity to care for these beautiful lions in their last days, and that we can say they were happy.


To read more about Moholoholo Rehab Centre and all the other facilities , please visit our Moholoholo website.
Posted by Moholoholo Animal Rehab Center 2 comments: Links to this post