It has been a busy couple of weeks for our volunteers and an exciting time for them to learn more about the treatment of the animals that live within the rehab centre.

It was noted that one of our resident Wild Dogs had seemingly injured his paw rather badly. He was limping around while the others darted past chattering loudly in the demand for food. Unsure of how this wound had occurred and concerned about its severity Brian had a watchful eye on him.

There was no improvement in the Wild Dog’s condition the following day and although his pack mates rallied around him in the wonderful way that is inherent to wild dogs we were concerned for him.

Brian decided that before a bad situation became worse we needed to tend to this limping animal. On the 30th April 2010 we separated him from his pack mates by moving them to the adjoining enclosure and prepared everything ready to dart the Wild Dog. Now darting an animal is a difficult task in its own but when your target is a slender and agile Wild Dog it becomes so much more difficult and great care and concentration is required! 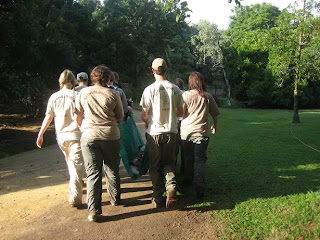 Once the dog had been hit with the dart we waited for him to succumb to the affects of the tranquilizer. The students were then called in to lend a hand to whisk the dog up to the clinic where we could take a closer look at the situation. With relief we discovered that the wound was not severe but bad enough to cause pain. Our volunteer Vet Nurses, once again, were able to broaden their experiences (how many of you can say you helped treat an African Wild Dog?!?)  as they observed and assisted as Natalie. Nothing more than a thorough cleaning was required and after checking all the vitals and weighing him the Wild Dog was once again moved back down to his enclosure.

He was kept in his feeding cage until he seemed stable enough to be let out. His pack mates were anxious about their fellow friend and called to him from their enclosure.
After a few hours he was reunited with them although after his ordeal all he wanted to do was find a shady tree to rest under.

All seems to be fine for the moment and we hope that the wound will heal quickly so that we can see him joining his pack mates as they race around in their comical antics.
Posted by Moholoholo Animal Rehab Center No comments: Links to this post