People who are new to Moholoholo Rehab often get a sparkle in their eyes when they hear us speak of the “lion cubbies”. They eagerly follow us in the anticipation of seeing two little speckled fluff balls romping around and in need of cuddles. Often it takes us a few seconds to register the confused and searching look when we proclaim, “These are the cubbies!”  Then we have to explain... 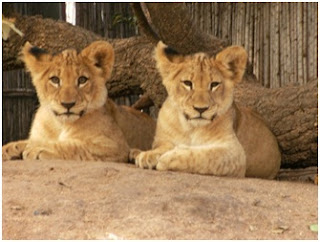 No matter how big these two boys grow, we will always see them as “the cubbies.”
At the age of 2 years and 2 months the boys have grown rather large! They pace proudly with the beginnings of a dark mane draped around their necks, they yawn widely to show off their impressive canines and just in case you missed how substantial the size of their paws are they may raise them up for you to have a good look. All this parading aside, what shows us that they are still the cubbies we know and love is when they come bounding to the fence make low moaning noises offering you a head rub – just like they used to do when they were small. 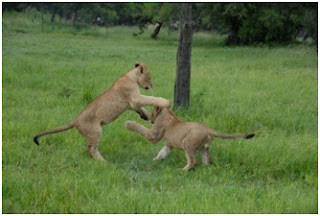 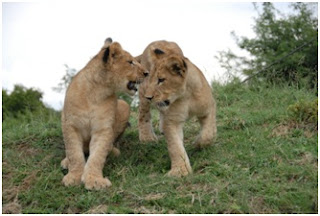 The way the lion cubs started their life resulted in them having to spend the rest of their time in captivity. They have no fear of humans what so ever, they do not know how to register the dangers of the wild and would not be very efficient hunters. When they were hungry they would turn to people for food, and might become aggressive if they are not given any or if the people “refused to play” or ran away - A lethal combination for people and these magnificent creatures alike.

A few days ago marked an important stage in the 2 males’ calendar of life... they were introduced to what we hope would successfully become their new “pride”. Two fully grown lionesses were brought to us from the same place as the lion cubs. They were aggressive and wild but we were unable to release them to a new location. They were placed in the camp next to the lion cubs so that as they grew they would accept each other. The lionesses would have killed the cubs if they were put together and this is why they were kept in separate camps. The timing had to be just right in order for us to integrate the cubs with the lionesses successfully. The boys had to have a sense of dominance, which would only come with age, which would allow them to stand up to the lionesses when they “fronted them out”. One lion at a time we introduced them to each other and things seemed to go reasonably well. There were a few squabbles, which was to be expected, but everyone seems to be getting along warily. It might take some time but soon they will be happy in each other’s company. 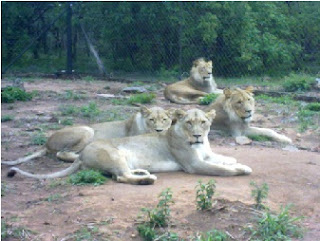 The females have been fitted with contraceptive chips to ensure that they will not fall pregnant. You may ask, “Why? Would you not love to have lion cubs cartwheeling about again?” The answer is No. As lovely as they are, it would be a terrible crime for us to breed lion. If you consider how much space is available to our wildlife these days you would recognise that there is just no more space to release animals such as lion anymore. People do not want them on their game farms as they kill their valuable live stock, they become a danger to people if they enter settlement areas and anything outside of that is purely uninhabitable for them... a terrible thought but the honest truth.
As the boys grow we hope to hear their mighty roars echoing off of the mountains which surround us, proudly proclaiming their place in the pride. 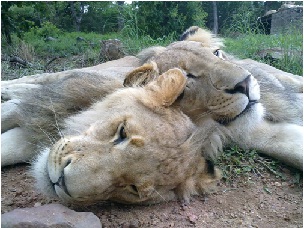 Posted by Moholoholo Animal Rehab Center No comments: Links to this post