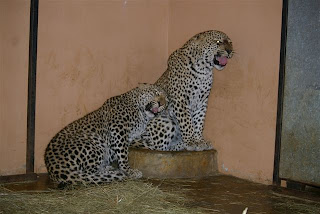 Farmer vs predator conflict is still a matter of real concern here in the Lowveld. In between game farm and conservation areas there are many farms that breed with livestock which is their main income. It is not only the local black community’s livestock that is caught by wild leopard, hyena and caracal but also the animals of the bigger and more protected farms.

Whatever the case may be it usually results in the animal being unwanted and hated. The farmer can then remove the “Problem Animal” or “DCA” (Damage Causing Animal) as they are called, which can be done through poisoning, shooting, catching and relocating the animal or even (believe it or not) burning the animal alive. This is the extent people can go to when they express a hatred for an animal. Thankfully in our area the farmers seem to use the catch and relocate method above any of the other methods.

Just recently on 16 and 17 August we were asked by a Cattle farmer nearby to assist in catching and relocating a leopard on his farm. We gladly assisted as we had the support of the local Environmental Affairs office. As it turned out we found out it was more than one leopard.

The 2 leopards concerned are two young male leopards. They are less than 12 months old as they still have their “milk teeth”. This means that the mother is still free roaming as leopard cubs only leave their mothers from about 18 months old.

Both leopards were obviously much stressed when we darted them in the trap on the 2 separate occasions. The one had grazes on his nose from trying to escape but it was fortunately not serious and is already healing.

They are both feeding well and being kept in the quarantine enclosures at the Rehab Centre until they are old enough to be released.

The farmer is still trying to catch the mother and we hopefully will receive a phone call soon to rescue her from that area before something awful happens to her.
Posted by Moholoholo Animal Rehab Center No comments: Links to this post

Agatha is back on her feet

Since her arrival Agatha the leopard has been recovering slowly but surely. But the first week was a battle.

She refused to eat or drink for the first week. Her mouth and insides were probably so sore that she could not take anything in. Though this was understandable, it didn’t help her recovery at all. Twice we had to turn to Dr Peter Rodgers the Vet to put her on a drip because she was so dehydrated. On one occasion he even had to tube some food into her stomach so that she could draw some energy from somewhere.

It took her another 2 days to start eating. At first it was only a little bit of meat at a time but she regained her strength quickly and in no time she was back to her old self, attitude wise. She puts up a big fuss when you come near the enclosure to feed her or clean the enclosure. She is not a happy cat, but she is safe and well looked after.

Her wounds seem to be healing well but it is not easy to monitor because she is not a very willing patient.

She will probably be released back to the wild as soon as she is ready to go and when we have found a suitable home for her.