It is a girl rhino at last for Moholoholo Animal Rehab

After receiving a constant stream of male rhinos we finally have a girl! 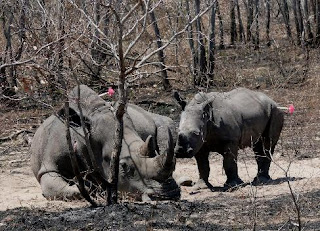 On the 7thOctober 2009 we received a phone call from a nearby Game Reserve regarding a female rhino that was unable to stand up; she appeared to be severely injured. She was found to have been involved in a confrontation with a large male who we presume had wanted to mount her. After further inspection it was apparent that her side had been badly pierced by the male’s horn. Sadly she did not survive her injuries and after a post-mortem was done it was revealed that the male Rhino had broken her ribs and punctured a lung. Unfortunately a calf was at her side! This now meant no Mum for the baby Rhino. A Rhino calf will stay by its mother’s side until it is 3-4 years old, requiring their mother’s constant care and attention, not to mention around the clock access to milk for at least the first 18 months! 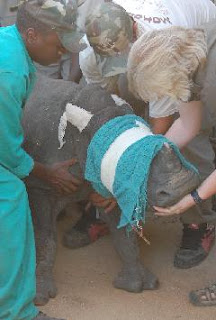 The necessary people were brought in by the Game Reserve and procedures were set to dart the young rhino. This was needed as being 5 months old she was no baby, baby and the “grumpy” temperament of a rhino had already set in. She was darted, loaded and transported here to Moholoholo. This is where Moholoholo came into the picture. After successfully hand-raising many White Rhino calves with the latest almost ready to be relocated to his new home, Moholoholo is well versed in the needs and requirements of a demanding patient such as this and so is a natural choice when trying to find a temporary haven for one of these precious babies.

While we were awaiting her arrival, phone calls were being made in the office to try and locate a 44 gallon steel drum. A steel drum you ask? Why would we need a steel drum? Well, when trying to feed a baby rhino who has never had human contact before, you might find yourself on the receiving end of an angry thump. A rhino at this age, that has been taken straight from its mother’s side, is still wild and terrifyingly aggressive. After many confrontations in the past, Brian had discovered when given the job of rearing baby Rhino’s in the Umfolozi Game Reserve in KZN that the drum can act as a welcome buffer when the rhino decides to direct all its fury in your direction. Brian would climb into the steel drum to enable him to approach the rhino calf. Instead of having to fall back from a charge Brian would be able to face the calf head on and persist with trying to offer the baby milk. The usual method follows the pattern of standing ones ground against a charge, bracing on impact and splashing milk around the rhino’s mouth. This will continue until the rhino realizes that the liquid you are splashing in its direction is milk! Then curiosity takes over and the rhino will start muzzling the teat. Eventually after squeezing and coaxing, the rhino will finally discover that by sucking the teat he will get milk. After that there is no holding back and lo and behold if you do not come with her milk on time, everything in her enclosure - whether it is the drum, chair or stick - will feel the brunt of her frustration! 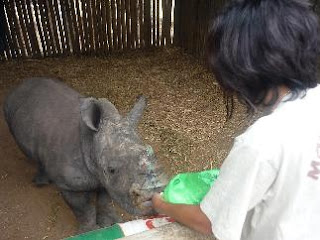 The rhino calf was collected and brought back to the Rehabilitation Centre that same afternoon. She arrived somewhat bigger than we expected and slightly wobbly on her feet. Her wobbliness was as a result of her having to be sedated so that she could be transported from the Reserve to the Centre. Her ears had also been plugged to protect them from the noise and her eyes had been covered by a towel. Gently she was guided to the boma and after a quick check-over she was left to settle in. It did not take long for Brian to coax her into accepting the bottle and soon she was sucking away quite merrily. The “rhino mommies”, in the form of two dedicated and commendable volunteers, have been spending day and night with her. They have to constantly talk to her to reassure her and sooth her. On top of this they have to administer her feeds every 4 hours around the clock. Slowly she is becoming accustomed to their voices and presence. We are grateful for their dedication and cannot thank them enough for their patience and persistence. She is not very receiving when it comes to new visitors and reminds us of the fact that, yes indeed; she is still a wild rhino. After estimating her age at about 5 months old she has been introduced to solids which she munches on contentedly throughout the day. 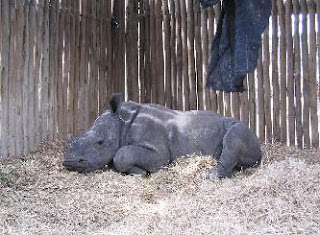 In celebration of her being a female white rhino. (The last 5 have been male) – The name inThombi was chosen for her – meaning ‘girl’ in isiZulu. Hopefully, soon, we can report to you that she has been moved to a new home where she can roam free and happy under the watchful eye of a dedicated caregiver.

Posted by Moholoholo Animal Rehab Center No comments: Links to this post