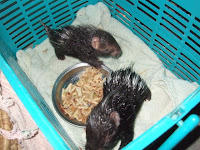 Most of you met our ‘spiky’ friends on a previous article. These little bundles of spikes with an attitude arrived here at the Moholoholo Animal Rehab Centre in the beginning of 2008. We took them to be around 2 weeks old and were told the mother was presumably shot. They were so small they could fit in your cupped hand. We named them Sonic and Rover.

This is the first time baby porcupines have been admitted to the Animal Rehab centre. Some research had to be done on what kind of milk to raise them on. The one bit of news we found out was that other porcupines had been successfully raised on Kitty Milk, which would provide a little more protein for the youngsters.

It was not difficult at all to get the little ones to drink; the only problem was handling the spiky little balls. Having to feed during the night we had to take them home with us. They became quite demanding eventually, waking you up when they are hungry by making a sound like a mixture of a cough, sneeze and growl. Once they had had their drink they would go back to bed and snooze off their filled tummies.

Sonic had an unusual habit of being a nuisance, by using his brother’s ear as a dummy whenever he wanted to go off to sleep. It took us a while to wean him from sucking it, but eventually he stopped, much to our relief.

They started feeding on solid food quite soon (how many weeks or months) and made easy work of the veggies and fruit that was given to them. This is also the time that they became spickier. Their quills started firming up making it more difficult to handle them when they were having a squabble (Strop). And they always made us giggle when they got particularly cross and starting rattling their little quills on their bottoms, like the adults would.

Since then they have been a very interesting addition to the Animal Rehab Centre. And they are adored by everyone. They then reached the age to be released but as is always the case with the birds and animals that come to the Moholoholo Animal Rehab Centre and are ready to be released….where can we release? Who would want them? It was not an easy task so we had to hold them for a number of months whilst looking for somewhere to release.

With all the rain we have had here in the Lowveld the bushveld looks lush and will provide enough food for these animals to be released. We eventually found a small reserve near Letsitele, here in Limpopo where there are almost no predators and good vegetation for the Porcupines.

Did they run into the sunset to be happy ever after…? NO! It just could not be that simple. As soon as the box was opened they ran out and took cover under the Moholoholo vehicle, and refused to come out regardless of any coaxing. Eventually we had to slowly move the vehicle away so that they were exposed and would run off into the bush. Again they counteracted this idea by running under the vehicle as it moved, some of our babies find it hard to leave the luxury treatment of the Animal Rehab Centre! Eventually we prevailed, knowing what was best for them (even if they didn’t) and they moved off into the bush to begin their new life of freedom. 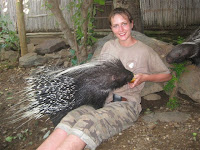 So the bottom line is that 2 spiky porcupines have been released back into the wild after being successfully hand reared at Moholoholo Animal Rehab Centre. We hope that they will enjoy their new home and stay out of trouble.