Imagine this scene. You live in a built up area and are tinkering around your garden, perhaps humming a happy tune. In your garden is an engine with a cover over it and as you pass it by...you hear a rather nasty growl.
What do you do? How do you feel? What runs through your mind?
Would you even consider the possibility that it might be a leopard? Well this is exactly what happened when a rather surprised person living in a town called Phalaborwa discovered a hissing, spitting leopard huddled next to an old engine in his garden. As the vet was close by he was summoned to assist with the situation. Rushing over to investigate more closely the vet soon recognised that this was a leopard cub which was in a terrible state. Being unable to fend for itself and obviously lacking a mother, this little cub was forced to seek easy food which could be found in residential areas. However anything he found would not be enough for him to survive on as at his age he still required the nutrients and goodness that could only be acquired from his mother’s milk.
As one could not approach this fearful little fur ball directly without causing large amounts of stress to the animal or being injured oneself, the leopard cub had to be darted before the vet could extract it from its secure hiding place. In the mean time Brian had been contacted by the Environmental Affairs. They had asked him if he would be able to fetch the leopard cub and care for it until it can be released. Being a cub this would still be a good few months and it probably had not learnt many of the skills needed for an adult animal to fend for itself in the wild. On route to a different destination Brian made an immediate detour and summoned the volunteers and staff to come and assist. 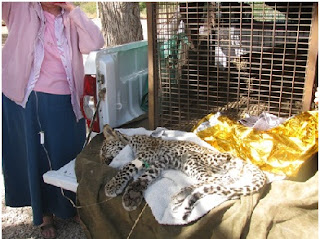 On arrival the sight was shocking! The poor thing was emaciated and seemed to be teetering on the edge of its life. Perhaps from some form of struggle 2 of its front teeth were broken off and its toe pads were raw.
Immediately it was hooked up to a drip so that it could be given fluids and was rushed back to the rehab. Settled into a warm cubicle we could only wait for the sedative to wear off.  Sadly we suspect that this infant’s mother had been caught in a snare or trap leaving it all alone 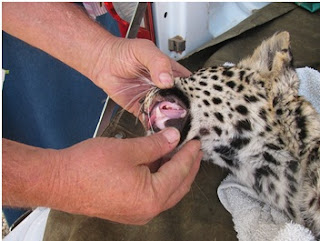 Finally, later that evening, Brian decided that we should see if it was ready to accept food. Wary at first but driven by hunger he edged closer and closer to the food that was being offered. After that initial taste he gulped down piece after piece hissing and spitting between swallowing. 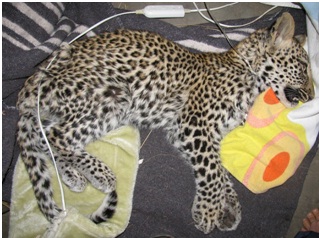 As the days have gone by he has hung in there and is clawing his way closer to survival. Eating daily and growing more vocal he will soon be ready to be put outside into the enclosure that is being constructed especially for him. When he stood up yesterday for the first time in three days we knew he was on his way to recovery. 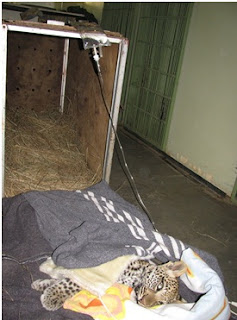 Enclosures such as these are costly to erect and often we have to rely on the money that we receive as donations designated by the giver to a specific task. If you would like to assist us in this please contact the office on the following email address: moholorehab@wol.co.za
Posted by Moholoholo Animal Rehab Center 1 comment:

What is naughty, chews on your feet and hides in bookshelves? Any guesses? None! Okay well let us try this one...
What is spotted, can crack through bones and cackles in the night? Well Done! A Spotted Hyena!
If you have not heard the stories by now or have not seen photos of our new baby then let me fill you in! One of our newest members at Moholoholo Rehab Centre is a baby spotted hyena!
He (we think) arrived here at the rehab only a few days old. Jet black with a mouth fill of teeth and curious, watchful eyes. This little parcel was sent to us from another rehab centre. Unable to identify at that age whether it was a male or female (as this is very difficult to do with baby hyenas) we could only hope for a more submissive male rather than a dominant female. 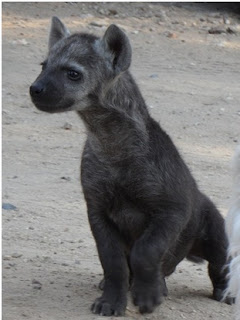 As the days crept by this curious creature became more and more active. We howl in laughter at its antics. As big and brave as they seem when they are adults they are as skitty and nervous when they are small. When caught by surprise we will catch a glimpse of a black streak dashing for cover giggling and chittering nervously. Once there he will edge back and forth trying to gather the courage to come out and investigate what you are all about.
Down at the house where he spends his nights if ever you are missing something, be it a shoe, a shirt, a pair of glasses... you need look no further than his latest den. The term ‘hoarding’ could only have been invented after surveying the way that hyenas decorate their living areas. Dragging items from far and wide to clutter around themselves in amongst their cosy beds.
During the day our little collector, spends his days up at the top section of the rehab, using the office as his base. When he is tired, his bed is hidden under a desk with a hidey hole box to creep into when he is not feeling very brave. In between naps he lopes around the office or rough and tumbles with Mitzy, the resident Maltese poodle. Now a word of warning! Never ever believe that your ankles are safe from this little snipper snapper! Born with a set of teeth he has a natural instinct to exercise and often it is the unsuspecting computer user that falls victim to these practice sessions. 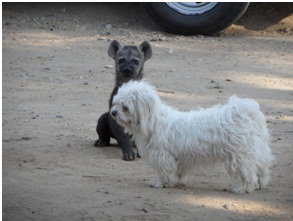 Hyena proofing the office was a task on its own but soon sneaky passages to behind the desks were boarded up, chewable items placed out of reach and dark cosy corners in filing cupboards declared out of bounds!  (Or so we thought.) 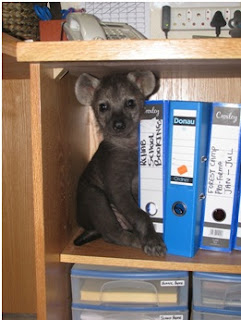 Every baby needs a name and this was given great consideration! Many alternatives were bandied around until finally the perfect fit was found.  Luma... meaning “to bite.” A more appropriate name could not have been thought of! As he grows he is starting to lose his black coloured fur and it is being replaced with blonde splashes speckled with faint spots. Adventures down the path and into the open garages seem to become more attractive but at 2 ½ months old he never ventures very far from his “mom” or the safety of his hiding place.
We look forward to sharing more antics and updates with you about this character filled addition to the rehab!
Posted by Moholoholo Animal Rehab Center 1 comment:

Sleep is not always an option for those who dedicate their lives to caring for animals. Brian experienced this last night (definitely not for the first time) when he received a distressed phone call at one o’ clock in the morning. The young lady on the other end had been driving and out of the blue a Honey Badger had appeared in front of her car. Before she was able to do anything to prevent a collision she hit the Honey Badger. Concerned about the state it was in she phoned Brian immediately to see if he was able to assist her.
Without hesitation Brian jumped into his bakkie and dashed over to the scene. When he arrived he saw that the Honey Badger was in a grave state. Her jaw was badly damaged with a large laceration under its chin. He brought the female Honey Badger back to the rehab. 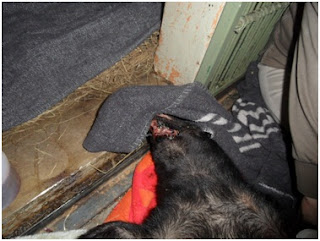 The most important thing is to keep an animal that has gone into shock warm. She is now in the clinic in a bed of hay with blankets and heating pads. After treating her wounds, pain relief was administered as this poor animal must have been in agony. Fluids are also very important and the volunteer vet nurse had this tough little critter hooked up to an IV as soon as she could. As soon as was able we took her in for an x-ray to assess the damage. Unsurprisingly it was discovered that her jaw was fractured on one side.  Her future is not written in black and white and we can now only wait and see how this usually resilient animal works through the trauma that its tiny body has experienced. 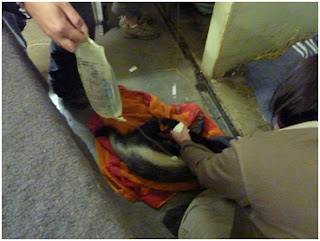 When living in areas which are less built up, there is often the chance of crossing paths with wild animals, the hardy savvy creatures that have been able to survive out in the true “wild”. Many a time these encounters take place on the man-made death trap made of tar. When this happens there is often nothing we can do to prevent a collision but all we ask is, please do not leave the animal there before checking the animals state. If a creature like this is still alive there is always a chance that it may be saved.
Don’t throw its life away... call someone who can help.
Moholoholo Wildlife Rehab Centre: 015 795 5236 / 082 907 5984
Posted by Moholoholo Animal Rehab Center No comments: