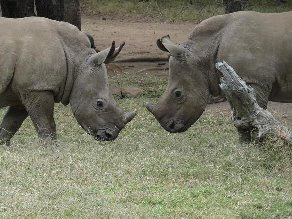 Having had our little rhino bundles for almost 7 months now, we can hardly describe them as “little”.  Kuza and Satara have grown into ‘2 huge tanks’ and their personalities have grown to match! They still follow their “Rhino Mommies” around and are not bashful to let you know when they want something with a cheerful nudge and a happy whistle.
Sadly the last few weeks Kuza and Satara have both been seriously ill as they became stricken with chronic diarrhea. We tried many different treatments, but to no avail, and as time wore on without any noticeable improvement, we began to fear that we would loose our babies. The local vet was called in and he advised on treatments. He injected our  babies and even went to the drastic measures of getting Kuza and Satara hooked up to drips to re-hydrate them and replenish some of the minerals and vitamins they had been loosing through this terrible ordeal. 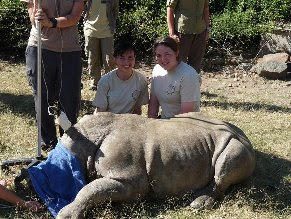 Now keeping a baby white rhino still when trying to insert a drip is not an easy feat as one can imagine! Extra hands were needed as it was all systems go and even Tanya Erasmus was roped in from the office to lend a helping hand to her glee!

This was a tense day for everyone at the Rehab Centre and we all watched and waited with baited breath. Kuza and Satara seemed to perk up a little after this… but it was not long and they seemed to be back where they started. We moved them to a new sleeping enclosure and they are now monitored constantly throughout the day. Never a moment goes by when they are not being watched over by a dedicated ‘rhino-sitter’ in the form of one of our many capable volunteers.
It is breaking our hearts to see our usually cheerful and cheeky grey tanks (who usually charge around the rehab) now wondering listlessly through the grounds or laying for long periods under a shady tree.
The vet call-outs, procedures and medication are very costly and a lot of our funds are being pumped into pulling Kuza and Satara through this infliction. As we are a non-profit organization and it is not our policy to ever ask for anything towards the Centre but we often battle to find excess money to pay for emergencies such as this one. This ordeal has cost in the region of R80, 000.00. We would appreciate all the support that we receive and are highly grateful for any donations.

If you would like to assist us in this cause, please contact Moholoholo Rehabilitation Centre on:
(015) 795 5236  / +2715 795 5236.
Alternatively you can email us at: moholorehab@vodamail.co.za
Posted by Moholoholo Animal Rehab Center 1 comment: Links to this post

One Step Closer From Being Released For Our Baby Servals

In a short space of time we were graced with the presence of 4 little fluff balls in the form of baby Servals which were brought in from different areas. We gauged them to be more or less the same age of about 2 months old. They are growing quickly and doing well. Their names are Scruffball, Fireball, Emma and Leila.

Fireball, named for her feisty temperament, was found in the Kruger National Park by a ranger. She was severely dehydrated and going in circles. They suspect she had been hit by a car, which would have been at night as Servals are nocturnal, and she was brought directly to us for attention.
Scruffball, the only male, came in from a farm in Polokwane where she was found and taken care of briefly before being brought to us, she was named thus due to his scruffy, thick coat.
Scruffball and Fireball were not greatly affected by the human contact they experienced and will be able to face the challenges of the wild head on. They have now been moved to an outside enclosure, taking them one step closer to their release.
Emma was found in the Sabie region at just 2 weeks old. She has a spunky, sweet nature and loves nothing more than chasing a feather around, practicing her pouncing technique. Although she was kept slightly longer by her rescuers and is a little tamer than the other two, she too has been placed outside with the others preparing her for her venture into the wilderness. 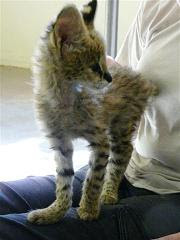 Leila has the saddest story of them all. After she was found, thinking they were helping, her rescuers decided to keep her. She was fed entirely on a diet of Wheetbix, a local wheat cereal, and cow’s milk. This diet was completely insufficient for her survival!!!! With the lack of iron and calcium, which she would naturally have obtained from meat and bones, her development was severely hampered. After 2 months of this food her growth was stunted, making her look a whole lot smaller for her age. Her coat became very course and short and eventually started to fall out. Her legs are dramatically bowed and she was solely dependant on humans for her food.
The first thing Brian needed to do was introduce Leila to natural food and the best way to do that was to give her soft food such as baby mice. Brian had to force the meat down twice hoping the taste for meat would ‘kick’ in. After that Leila latched her eyes onto Brian as if to say “What was that you gave me? That tasted like something my genes say I have been missing, how about more?” Well that was it! She caught 2 on her own that night and drank her milk with gusto!
With her clumsy lope, playful, affectionate nature Leila has won over many a heart at the Rehab Centre and is fast becoming a favorite. We hope that with the right diet her coat will at least come right. We are not sure if her legs will ever right themselves… only time will tell. In the meantime we are trying our best to entice her to catch live prey and teach her to be independent, taking her one step closer to a life in the wild she has never known.
People might be appalled when reading about feeding animals with mice, rats etc but one must realize that to release them back into the wilds they must be given the food they would prey on naturally to give them the nutrition they need for bone development. You can see from the photo of Leila what the outcome is when they are not given the right food. Their next option if not fed right would be finding their way to people, killing chickens and so on. Never can an animal, when needing to be released, be succumbed to a humans’ way of living and eating, we must try our uttermost to rear them as close as possible to the environment that they would be released in. It is not even a matter of releasing them anywhere, one must make sure the area is not stocked already and to find somewhere that is prepared to take them if they are not able to go back where they came from.
Find out more about animal rehabilitation at Moholoholo.
Posted by Moholoholo Animal Rehab Center 3 comments: Links to this post