I slipped off easily that night, I actually was sleeping very well, when in my sleep at approx 1h: 30 am I heard broken glass….I awoke…. listening, there it was again, glass being scrapped on concrete. It happened again; I tapped Brian on his shoulder hoping he would not talk out loud like he normally would. 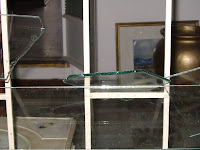 He slowly turned over and I was able to whisper in his ear that I heard broken glass. The question was where? Was it the bathroom window? Or could it have been the veranda? I slipped off the bed to look out the bedroom window…….….nothing! Brian went to the bathroom window….nothing! My  heart was beating ‘10 to the dozen’ I gently took out the bedroom door key to peep through the key hole which would give me a view down the passage into the dinning room….nothing. Now we were confused, where was the intruder? Brian then slowly opened the door, still nothing. He then went back to the bathroom window while I re-closed and listened at the door…..yes…there it was again this time a different noise, was it Misty our Maltese poodle pup scratching at the kitchen door? When your heart is beating so loud the sounds you hear are not so clear!

Then to crown it all, the burglar alarm went off, oh no! Now what are we in for! With the daily news of murders and robberies and having been attacked once before in our home, ones mind goes over time with thoughts at a fast speed. I opened the door slightly…. I then heard a shuffle…the intruder was coming, it was coming from behind the curtain from the hall way! My heart beat even faster, I slammed the door shut, I went numb could not speak, made signs with my hands trying to tell Brian it was,  mmm ahem, mmm ahem,…………………………...Stoffel the honey badger!!

Stoffel brought back memories when he attacked Jan Last one of our guides, nearly taking his finger off, it took three men to wedge him off Jan. He grabbed Hugo Crouse one of our guides on the arm as well which the men had to try and wedge off! The power in his jaws is almost unbelievable as his jaws lock which makes it extremely difficult to undo. Bearing in mind as well that a bite from a Honey badger can severe what ever he has taken a hold of with those vicious teeth and leave you crippled for life. 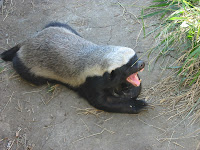 After the intruders appearance, did I feel relieved? No! I do not know which was better, to have Stoffel as an intruder or a human intruder. They were both terrifying. One could hear him running up the passage straight for our bedroom door and lay there listening to what we were doing! Brian opened the door to talk with him but he had his tail up and was growling which was a sign ….”Do not touch me, I bite! I am upset.” We could only presume he was upset by the burglar alarm which is very loud and piercing and which can get your heart beating never mind an intruder as well! Brian tried a few times to talk to him and even attempted to stroke him but he lashed out at him.

The worst was still to come. We tried phoning the guide’s cottage for help….phones lines were dead! Now what?  Brian looked around to see if by chance he had his hand radio …yes, in the bathroom thank goodness! He radioed for help, Thom answered and said he would come up; he used his head and went to the clinic to get some Honey to coax Stoffel back to his enclosure, but….how do we let Thom in? The key was in the dinning room door, far from our reach!

Fortunately we leave the window open slightly to allow the guides to drop the keys onto the floor after arriving back from dinner with the students. We suggested Thom puts his arm through the window and tries to get the keys out the door which he did.

He then called for Stoffel who immediately answered. Thom did not hesitate to wait for Stoffels reaction (he was not sure what his mood was like at that stage) but ran down towards Stoffels enclosure calling him and once there climbed into the enclosure himself!  From inside the enclosure he lent over the wall and offered Stoffel some honey – he ate it hungrily, as always!  He placed a crate at the base of the wall so that Stoffel could easily climb in and continued to try and tempt him with the honey!  Unfortunately Stoffel is no push over, he kept coming forward for honey and then backing up once he had a mouth full!  This game went on for quite a while until eventually he climbed in over the wall and Thom stood in the enclosure and allowed him some more honey – at this stage he was completely calm!  Probably because he was so full of honey!  Thom then jumped out of his enclosure and left him to sleep off his tummy-full of honey!!
How did Stoffel (sometimes nick-named Houdini) get out? This time it was not a rake or broom that one of students left in the enclosure nor was it a rock that he manages to maneuver towards the wall, this time believe it or not was a large sand clot of soil that he had pushed into a heap against the wall until it was high enough for him to climb out!!!! Although Stoffels antics are enjoyed and admired by his agility and strength is something to be aware of at all times.

Few lessons we have learnt:
•    Keep a charged radio by your side incase of the phone lines being down.
•    Have the cell phone available not on charge at night which ours was.
•    DO NOT keep the key in an outside door with an open window close by!

I bet that took a few years off your life!

Just curious - why were the phone lines down?

Hi Elizabeth and rest of the dear family, need you ask? but then again you do not live in Africa....the copper wires were once again stolen!!
Miss you all, so pleased you can now see what we are up to with our news!
Lots of hugs
Jenny

Hello Jenny! Kim from San Diego here. I am so excited to see all of the news on the website and the new format. It's great for those of us that need a "Moholoholo fix". Thanks for posting the Stoffel story. I'm glad to hear he didn't tear up the house or you and Brian. I hope you are all well and healthy. Cheers, Kim