White Stork checks himself in at the Moholoholo Animal Rehab

In 11 May 2009 we noticed a White Stork outside the Moholoholo Animal Rehab gate. Usually elegant and graceful birds this particular one had difficulty in moving. We decided to go out and see what was wrong. Soon it was found that this beautiful bird had a terribly injured leg. On discovering this we realized that somehow this bird was trying to check itself into rehab!Quietly and surely we walked up to the poor bird with the aim of trying to catch it whilst causing the least amount of stress! Once we had it we whisked it off to the clinic where we could take a closer look at it’s leg. 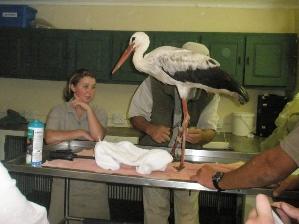 The leg seemed to have been burnt and from past experiences it looked as if these burns had been inflicted by the likes of a power line. Power lines are deadly obstructions to birds especially those where the wires are lined up vertically instead of horizontally – they act as an electric net from which grasp many birds do not escape alive.Brian, assisted by our vet nurse treated the Stork immediately and prepared food for it. 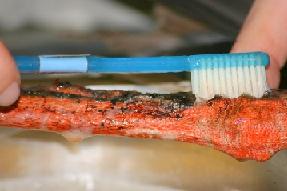 Soon enough we were all calling this self-checked in patient “Storkie” and watched as its leg healed slowly and painfully. The next obstacle we faced was when could we release Storkie back into the wild? White Storks are naturally migratory birds and so we had to keep Storkie safe and comfortable until his fellow companions returned from their adventures over the ocean. Sightings of White Storks had recently been reported and Storkie was fit and healthy enough to be reunited with his fellow Storks who were slowly returning in search of food and the warmer climate. 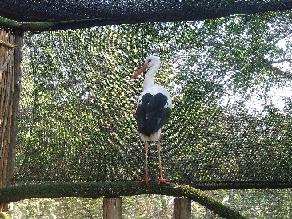 The time came! And on the 24th December 2009 Storkie was set free once again on Nhoveni, a part of the greater Kruger owned by Moholoholo. The volunteers went with and were quite surprised when he did not bolt out of the box and flap away to his future. Instead he stood a while and preened his feathers… perhaps wanting to make sure he would make a good impression on his new family? I am sure they will all have a lot to catch up on and new adventures to plan!
Posted by Moholoholo Animal Rehab Center