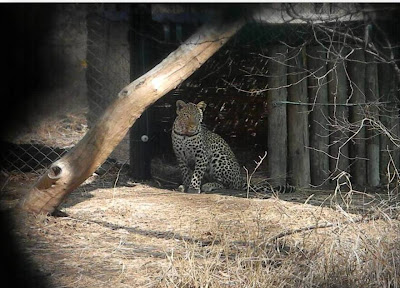 A pair of our leopards has officially been released in Malawi, with another 2 following by the end of this month. We are all anxiously following their movements by their GPS collars, they seem to be doing fine in their new home and we’ve been able to establish they both have made kills!.

Sending our leopards to Malawi has raised many questions. With such abundance of leopards in the wild, authorities have been considering putting down the “problem” ones who are being pushed out due to territorial fights, as they seem to have a taste for cattle or expensive game. Facing this new problem we are grateful to be a part of this wonderful experience of being able to send leopards elsewhere.

The leopards moved to Majete Wildlife Reserve in Malawi as part of a repopulation initiative started in 2003 by Dr Anthony Hall Martin, African Parks, Enviro Affairs and many others. In the 2003 the area of about 75.000 hectares had virtually no animals left. 30 animals were counted, this including duikers and warthogs. With a lot of community work they have now been able to make the community feel and care about these animals, as this new reserve gives employment to over 2500 people. The interesting thing is that the people that viciously protect the animals in the reserve are the same ones that nearly 10 years ago were poaching them. Having reintroduced more that 400 elephants, buffalo, sable antelope, 12 black rhinos, etc. it was now the turn for the predators. Only lions and leopards will be re introduced in the area as these are the ones that we have historical records of living in the area. They are looking to introduce 8 leopards and the lions will be only coming next year and so the project can be “finalized” in the term of reintroducing animals. It’s been a great success because we’ve managed to do our small bit and help reintroduce wildlife where humans had almost extinguished them, and this is makes us very proud!.
Posted by Moholoholo Animal Rehab Center